Mr. Trudeau the Leader of Liberal party of Canada would normalize ties with Iran and stop bombing ISIS, if elected PM, a dangerous desire! 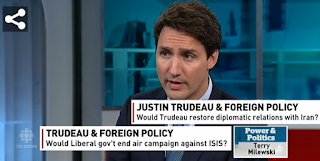 Posted by concerned members of the Iranian community in Ottawa at 5:31 PM No comments:

All meeting Candidates in the Sandy Hill community centre

Tonight at the Sandy Hill community centre, the Candidate for the Green Party of Canada ridiculed human rights.
After a gentleman asked where the parties stood in terms of violation of human rights in China, Mr. Akbar Manoussi looked to his both sides and asked with the smirk:” Is there any Chinese here?” The other candidates looked at him wondering what he was doing even Mr. Bélanger, the Liberal candidate who earlier defended Manoussi when he was asked about his involvement with the Iranian regime by several Canadian-Iranians in the crowd, looked at him and frowned.
The concern that the Iranian community in Ottawa had was how and why an affiliate of a brutal and Fundamentalist regime such as the Iranian regime which is against human rights, environment… and tortured, raped and murdered Canadian photojournalist, Zahra Kazemi, could represent the Green Party of Canada, a pro environment, human rights and … entity.
The very presence of Manoussi in the Green party is a threat to our democracy and should alarm the people in the Ottawa/Vanier riding and the whole nation for that matter who enjoy freedom and democracy in this country. Our national security is at risk and the party leaders must be careful, vigilant and act responsible. They must not allow an affiliate of a regime which is anti human rights and the supporter of terrorism, abuse our democratic system. For that reason Iranian-Canadians from different political views showed up to appose Mr. Manoussi’s candidacy in the Green Party tonight.
There is no question that a member of Taliban or a Nazi supporter could not become a candidate for a Canadian political party so why our Canadian politicians are so indifferent regarding the Iranian regime’s infiltration in democracy in this county?
It seemed that a few of the candidates were indifferent about the human rights in Iran.
According to the Iranian regime’s officials, in one city alone (Mashhad) 500 people await executions, presently tens of journalists, human rights activists are imprisoned and are on hunger strike. Women activists who appose the state supported polygamy are under watchful eye of the SSF (State Security Forces) or in prison.
Oct. 7, 2008
Posted by concerned members of the Iranian community in Ottawa at 10:09 PM No comments:

Who is Akbar Manoussi the Ottawa/Vanier Green Party candidate and what is his relationship with the Iranian embassy
1. Akbar Manoussi receives millions of dollars to establish a Cultural Center in 2 Robinson St. for the Iranian embassy in Ottawa.
The Ottawa Sun 21, 02, 1999 by Kathleen Harris:
” A corporation report obtained from the province’s Ministry of Consumer and Commercial Relations names Ottawa Lawyer Alain Dubuc as the administrator of Fatima Cultural Activities Inc., the purchaser of the Crown property. An employee from his office produced two names of local people involved in the cultural center project- including Akbar Manoussi. When contacted, Manoussi said the project, which will house a library and cultural activities, was financed by private donations from “various channels” across North America. He did not know of any direct support – financial or otherwise – from the Iranian government. “They can’t afford it economically,” he said. “There are many projects not taking place there because of the economy.” Aware of opposition from some local Iranians, Manoussi insisted their worries are unfounded. “There are many people who are neutral about the government” he said. “These people may be emotional about the politics and a little violent in their opposition of the government. But they don’t have to get emotionally disturbed about it. “There are some problems back home – let’s leave them there.” But soon after he was informed about evidence linking the center to the Iranian government, Manoussi ended the interview and asked that his comments not be attributed to him since his role in the project was “very small.”“My knowledge is not very much – I just heard about it,” he said. “There are other people who are more involved.” “
To find out more regarding the “cultural center” located at 2 Robinson St., please read the entire report below:
(The actual copies of the newspaper is at the bottom of the page)

IRANIAN exiles fear the terrorist
Threat which drove them from their
Homeland is finding its way to Ottawa.

“These people may be emotional about the politics and a little violent in their opposition of the government. But they don’t have to get emotionally disturbed about it.
“There are some problems back home- let’s leave them there.”
But soon after he was informed about evidence linking the center to the Iranian government, Manoussi ended the interview and asked that his comments not be attributed to him since his role in the project was “very small.”
“My knowledge is not very much- I just heard about it,” he said.
“There are other people who are more involved.”
Reza Shams, who runs an Iranian radio program as a sidling to his small business operation, thought he had found a safe haven in Canada in 1989.
But Shams- a pseudonym he uses on radio shows and in published articles because of fear of reprisal to him and his family members- feels increasingly threatened by the government- supported centre.
“This is a big irony. We come here to be safe. We escape from there, but they come to us,” he said.
A member of the Concerned Iranian Action Committee of Ottawa Carleton which was formed to oppose the cultural center project, Shams is one of about 60 people who will hold a demonstration outside Robinson St. site this afternoon.
The cultural center is a front for a facility which will be used to control lives, he said, firmly rejecting any possibility that another Iranian community members living in Ottawa would participate in cultural activities at a center linked to the Islamic government.
“If the Iranian government is involved, it is impossible,” he said. “It is not logical. If we escape, why would they build us a community center? And they don’t have the resources for this. If they spend so much, there is something very special behind it for them.”
A civil engineer and political refugee who fled to Canada 1987, Shams agrees there is much to fear in the activities at the center. The Islamic regime is well known for keeping a watchful eye on political dissidents, but he believes the purpose of this building could be even more dangerous. “This will be the base for all of North America,” he said.
As a human rights activist in Iran, he spoke out against the fundamentalist regime after he learned the schools he helped build were being used as prisons. He doesn’t want his name used for fear of repercussions.
“If you give them the house to build their plans under the guise of the Iranian community here, you give them the freedom to move these people and govern the people,” he said.
“You’ll never have %100 answers until something happens.”
John Thompson, executive director of the Toronto-based Mackenzie Institute which studies political instability and threats of violence, said local concerns are justified. But he suspects the centre may be used more for “grey” activities like exerting Iranian influence, propaganda and even watching dissidents than “black” activities like terrorism.
Typically, terrorist activities will be distanced from funding sources by several layers of “cut-outs” which create a group that has no corporate identity, he said.
“They may be wrestling for influence,” he said. “It may be outlet for propaganda- a fight for the hearts and minds. But anything more sinister than that, it’s impossible to say.”
The Iranian government has established a “major intelligence” in Europe and has silenced and killed dissidents there, Thompson said. For that reason, government opponents living in Canada have reason to be afraid.
“If I had no love of the Iranian government, I’d certainly be keeping my children out of there,” he said of the centre.
Conservative Sen. William Kelly, who chaired a senate committee on national security and intelligence, stressed the importance of not “pointing the finger in every direction.” But he said Canada must be “unusually alert” because of the nation’s leaky refugee determination process and its status as a “soft target” for terrorist.
“I don’t know enough about it yet, but I certainly think they should be looking at it very closely,” said Kelly, who has only recently learned of the Robinson St. project.
He said it’s easier to get into Canada and move around freely than in any other Western nations.
“That really leaves us open to all kinds of bases from which terrorist activities can be directed from Canada,” he said. “That’s a thing we’ve got to be concerned about. I’m not suggesting that this is the situation here, but I’m suggesting it has the potential for it.” He could not comment on whether local fears are justified, but encouraged concerned individuals to file reports with CSIS. “Let’s hope they’re wrong,” he said.
Ron Gracey, who served as an adviser to Senator Kelly, said terrorists often enter Canada to escape hunts by police or security forces of other nations. Others come for temporary “respite” before moving on, he said.
“Canada is not a target of terrorist attacks, it’s more a venue of opportunity where those groups or representatives organize funding, organize attacks abroad, uses safe houses,” he said.
Gracey said it would be “exceptional” for the Iranian government to allow itself to be publicly identified on documents if the center were to be used for “bad things,” but couldn’t guess why the government would be financing the center.
“I just don’t know what the Islamic Republic of Iran is doing engaged in what amounts to private activities,” he said.
Escaping to Turkey in 1988 where the UN helped move him to Canada, a small business operator now living in Ottawa is convinced he will once again be under the close watchful eye of the Iranian government.
“Right now, they will try to do what seems right,” Said the man who was kept as a political prisoner for two years in Iran. “But in the future I am sure they will bring their gown from under the coat. In the future, the Canadian government will have a problem.”


2. Before Sept. 2001, the "Fatima Cultural Activities Inc." changed to "Mobin Foundation".
An English sign attached to the building reads “Iranian cultural Centro” but in the Iranian regime’s official websites this center has a different name such as: ( Markaze Farhangie Iranian and Farhangsaraye Iranian).
In 2007 the Ottawa city website: http://ottawa.ca/residents/public_consult/nicholas_mann/index_en.html names Mr. Manoussi as the stakeholder for that centre. Also Mr. Manoussi in his own website in 2007 announces that he is the “Director General of the Iranian Cultural Centre in Ottawa”: http://www.gpo.ca/node/493
Hence, making it obvious that in fact he still has the same level of involvement or probably more in the same project.

3. Akbar Manoussi, calling himself the member of “science council of Carleton u” and the “Director of Iranian Cultural Centro” in Ottawa, gets reward from the Iranian official and becomes the honorary councillor to the Assembly of the newly established Aras Institute inside Iran. http://arasfz.epr.ir/2007/01/ 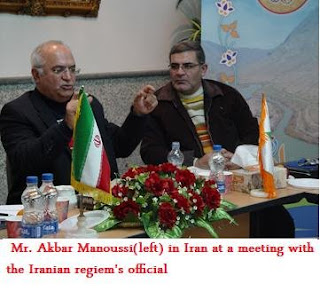 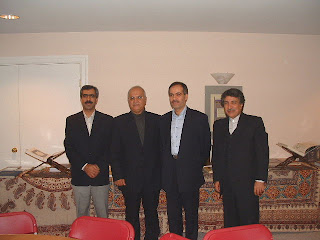 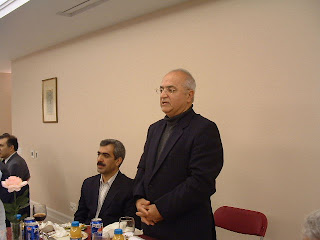 5. Manoussi organizing a conference for the Iranian embassy members in Ottawa U
http://www.farhangeiran.com/seminar.htm 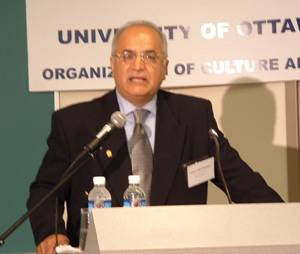 Posted by concerned members of the Iranian community in Ottawa at 6:15 PM No comments:

concerned members of the Iranian community in Ottawa
This weblog tries to reveal the true face of the Iranian regime and its affiliates in Canada. By Reza Shams & Narges Ghaffari nargeseghaffari1@gmail.com